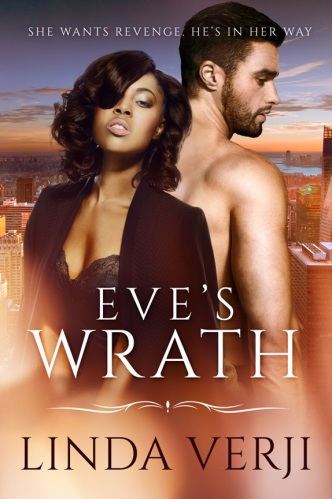 But her plan has one fatal flaw.

She’s fallen in love with her husband.

It took all her effort to keep her breath even as she asked, “Then what do you want?”

Everything in her froze. Her blood, her senses, her limbs… they all stilled in shock. It took all her effort to stutter, “Wh… what?”

“I want you, Eve.” He set his palms on either side of the counter behind her effectively trapping her between his arms. “I want you.”

It was almost as if someone had pressed the slow motion button. She saw his eyes darken, saw how they lowered to her lips. When his face started coming towards her, she watched in horrified fascination. Her brain told her to shove him away from her. But her lips tingled and the rest of her wondered what it would feel like to let him kiss her. Would he taste amazing? Would his lips feel soft? How would it feel to brush her tongue against his?

Just as his breath whispered against her nose, she turned her head to the right.

GET YOUR COPY OF EVE’S WRATH