He’s been a single father for so long that words ‘love’ and ‘fun’ have disappeared from his vocabulary. That is until Gigi Champion crashes into his life! Gigi’s the pesky neighbor he never wanted. Sure, she’s gorgeous, vivacious and has the prettiest eyes he’s ever seen. But it seems like her mission in life is to make a hot mess of his neat, responsible, o-so-serious world.

She’s definitely not his type.

The problem is Michael can’t get her out of his mind. All he wants to do is haul her over his knee and see that pretty mouth of hers open with a pant, a gasp, and a long moan. But he can’t do that. Or can he?

“You don’t have to say sorry,” she preempted. “Apology already accepted.”

Michael was quiet for an uncomfortably long time before he chuckled. “I’m not here to apologize.”

He shrugged. “Why should I?”

“I know, but I don’t see why I have to apologize for it. I liked it.” A smile tugged at the side of his lips as he added, “And so did you.”

“You must be out of your mind. I. Did. Not. Like. It,” she enunciated each word clearly. “That kiss was totally one-sided.”

“One-sided?” His eyebrows flew up so high they almost touched his hairline. “Really?”

“Really,” she lied through her teeth.

“Could have fooled me.” He guffawed. “I remember you pulling me in for more.”

“You remember wrong,” she retorted even though the memory of how she’d dragged him right back to her flashed in her mind. She scoffed. “Why would I like kissing you? Why would I? Just the thought is enough to-”

Her words screeched to an immediate stop when he took a step forward.

“Wha… what are you doing?” she stammered as she took a step back. But she didn’t get far.

With two long steps Michael closed the distance between them. Before she could even react, he’d grasped her shoulders. She froze, feeling stupidly breathless and dizzy at his proximity and touch.

He urged her backwards until her back was against the wall. His gaze shadowed, he murmured, “You didn’t like the kiss?”

Even though her heart was pounding and all her senses were alive with awareness, alertness and excitement she breathed. “No, I didn’t.”

“Really?” Michael leaned forward, pausing with his mouth barely inches from hers. “You didn’t like it?”

Her breath was now coming in pants and every nerve in her body was crackling with anticipation. The pressure of his hands on her shoulders was light. If she’d wanted, she could’ve pushed him away. But she didn’t. Unconsciously, she arched her back so that she could press her swollen breasts against his chest. “No, I didn’t like it.” 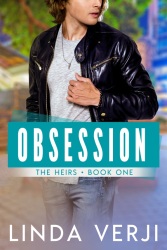 GET YOUR COPY OF PASSION